We are delighted to introduce to you Tempo precision motor drive. Tempo is based on our reference motor drive utilising some its most advanced control circuit design, implemented to advance beyond the SG motor drive with which the RG-1 and SG-1 record players have already received worldwide praise. The Tempo enhances the musical performance and makes the experience of listening to vinyl on the RG-1 or the SG-1 closer to the original master. 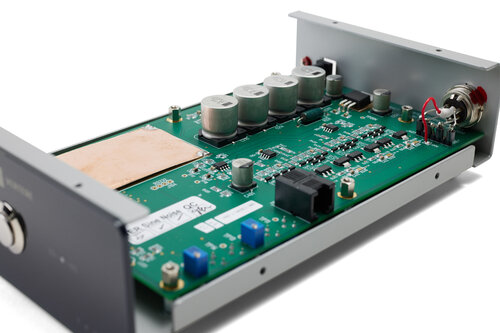 The music we hear when playing vinyl records, in reality, comes from the motor! The motor is the only source of energy in the system.  It is this energy that drives the record past the stylus thus making the music we hear.

Any amount of noise or fluctuation in the drive system will adversely impact on the music.  Detail, dynamics, timbre, timing and musicality are just some of the qualities that will suffer as a result.

The Tempo takes control of the record player motor and provides it with smoother drive with lower noise and lower distortion. Its internal circuit as with the reference motor drive is uniquely microprocessor based providing a pure sine wave in the digital domain and then converted to analogue via an on-board DAC. Two waveforms are derived, a cosine and a sine, which are then amplified using two bridged amplifiers to power the motor.

Initially, we expect Tempo to sell with Verteres SG-1 and RG-1 record players and SG-1 tonearms, however MG-1 customers will be pleased to know that they will also be able to upgrade to Tempo too. More details on this to follow shortly.